The Nonlinear and Statistical Physics group started its activity in the early 90’s with the aim of studying aspects of Condensed Matter Physics and Material Science where nonlinearity is an essential feature. This original interest has been gradually opened to numerous problems belonging to other fields -Biophysics, Complex Systems- where the ideas of statistical and nonlinear physics shed abundant light. It can be said that the recent opening of Physics (especially the nonlinear and statistical physics) to new interdisciplinary research directions has led to the emergence of two new disciplines, Econophysics and Sociophysics, as well as considerable impetus to the already existing Biological Physics. This is a recent “intellectual movement” that is taking place in the international community of nonlinear and statistical physics. 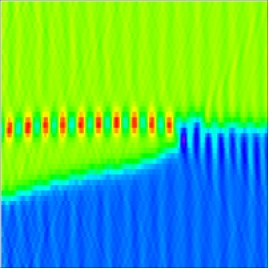 Being more specific the activity of the group in the early years was focused on the dynamics of nonlinear systems and its application to macroscopic superconducting circuits and discrete models with length and time scale competence (see for instance the review article of LM Floría and JJ Mazo in Adv. Phys. 45 (1996), 505-598). Subsequently, the group has devoted a major effort to the study of spatially localized excitations in discrete systems (networks), and led both national and international theoretical and experimental activities in this area (see LM Floría Phys. World 13 (2000 ) 23-24, DK Campbell et al. Phys. Today 57 (2004), 43-49).

More recently, the group has made contributions of outstanding significance in scientific problems such as directional transport in nonlinear lattices and their applications in superconductors and molecular motors; modeling at mesoscopic scale of proteins and nucleic acids; the statistical mechanics of dissipative classical and quantum nonlinear systems; and control of chaos in spatially extended nonlinear systems. To finish, one of the most recent items which deserves special mention (for the quantity, quality and impact of our contributions), is the study of the so-called complex networks and the collective behavior of interacting dynamic agents with connections determined by the topology of the networks (see S. Boccaletti et al. Phys. Rep. 424, 175-308 (2006)). The group stands among those pioneers in the field of complex networks in general, and in the specific issues that will be addressed.