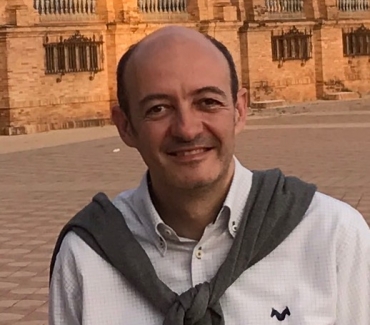 In particular my current main research topics are:

(link to the news in Spanish)

Juan José Mazo and Pedro Martínez, two researchers from the Institute of Materials Science of Aragon (CSIC-UZ) and the University of Zaragoza, have solved a phenomenon elusive for almost 30 years. The scientists propose an atomic scale friction model that allows predicting morphological changes in the surface in a controlled way.

About 30 years ago, the first observations of the appearance of a series of curious patterns were published, by way of undulations, on soft surfaces of polymers studied by an atomic force microscope (AFM). These undulations, which appear as a result of the tip of the AFM, which shapes the surface, have been observed repeatedly but have never been satisfactorily explained to date.

In the latest issue of the Physical Review Letters (https://journals.aps.org/prl/abstract/10.1103/PhysRevLett.122.256101), Juan J. Mazo and Pedro Martínez, two researchers from the Institute of Materials Science of Aragon (mixed center CSIC-UZ) and the University of Zaragoza, in collaboration with Dr. Enrico Gnecco and collaborators, from the Friedrich Schiller University of Jena (Germany), have proposed an extension of a friction model at atomic scale and have applied it satisfactorily to the study of the formation of these structures on a polystyrene surface.

The relevance of work is not only given by the understanding of a phenomenon elusive to science for almost 30 years. The proposed model also allows predicting morphological changes in the surface in a controlled manner. The results, obtained in the case of the letters “UZ”, are extrapolated to other patterns and scalable without any physical limit.

An atomic force microscope is a special microscope that, more than seeing, allows us to touch a surface with atomic sized fingers. By touring it we can get an idea of many of its structural and functional characteristics with a resolution in the nanoscale.

If the surface is soft enough, the tip of the AFM can mold it, similar to how a finger molds a plasticine surface if it travels with sufficient force. Thus, in our case, the tip of the microscope is able to penetrate the material, deforming it, while it is pushed along the surface of the sample. In the published work, the results of a series of numerical simulations in three dimensions are compared with recent experiments, obtaining an outstanding agreement both in the reproduction of the expected patterns and in the peculiarities observed in the boundaries of the materials.

But the proposed model opens up other possibilities, since it allows us to go beyond the effect of a single point and comb a surface with a net of nano-points simulating the first stages of the abrasion phenomenon. This is an important advance. Friction problems are extremely complex, have challenged physics for centuries, and are still not properly understood today. The work carried out proposes a simple and elegant theoretical model that allows us to understand and reproduce for the first time the experimental observations made, and on the other to establish a safe port from which to start to explore new phenomena of interest.